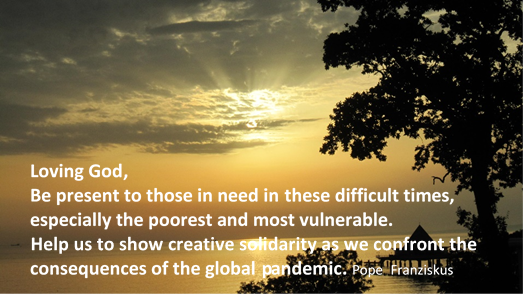 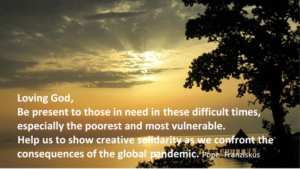 WHAT WE CAN LEARN FROM THE CORONA CRISIS:

An Invitation to live in Solidarity

Crises can bring out the best and the worst in people. The Corona crisis has triggered an unexpected solidarity. Doctors and nurses, pastoral and social workers risked their lives in the service of the infected. Other professional groups made it possible to maintain public services. Neighbours helped neighbours. Countries helped particularly affected neighbouring countries with material, personnel and free intensive care beds. Almost all people of all generations were prepared to accept painful restrictions of their freedom in order to protect their own lives and those who are more at risk .
The great challenge is to continue to live this spirit of solidarity in our own lives and in our society. Everyone has been committed to tackling the crisis: Christians of all churches, Muslims and people without religion. This experience invites us to live a greater “ecumenism” and to work together for a more just and humane future, not only in the Corona crisis, but also in addressing the many other major problems of humanity together, regardless of religion or belief

But the amazing thing is
that the inner resources of strength and human greatness, the ability to rise above oneself, are revealed, which generalizes negative judgments about today’s world and today’s youth. The experience that there is more in people than we often think, gives rise to the hope that we urgently need.  Cardinal Walter Kasper

It is worth noting that during the Corona crisis many good and positive things also come to light. It has become clear that we humans are all dependent on each other, that we are all in the same boat, and that we are called upon to support each other and especially those who are particularly affected by the Corona crisis.  Cardinal Kurt Koch

We witnessed… heroic solidarity and sacrifice in the service of the sick and the threatened. It is precisely in these expressions of love – whether in activities of “believers” or of “unbelievers” – that something sacred and unconditional has been revealed. There something was revealed. That we Christians call “God”… Let us develop an ecumenism whose aim is to understand humanity as one family (as children of one father) and the world as one common house.  Tomás Halik

God has shown you, O mortal, what is good.
And what does the LORD require of you?
To act justly and to love mercy  and to walk humbly with your God. Michah 6,8 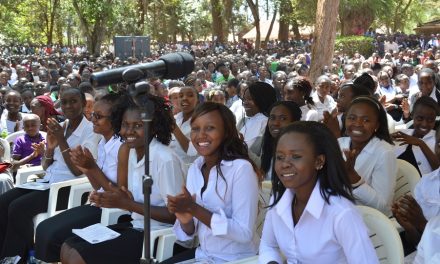 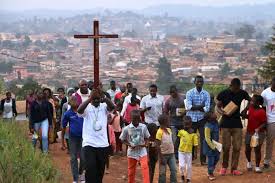